A Date To Remember : My Week At Ku Retreats

The offer was on the table.  Aware that I was fortunate enough to have a week to spare on the island, my friends Dominika and Miguel suggested I spend it with them at their retreat. I promised my dog I'd come and visit her every day, packed a couple of books and a toothbrush and was on my way.

I was to collect one of their guests en route. We emerged unscathed from the maelstrom that is Ibiza airport in August, the roads growing quieter and narrower until we were winding upwards through dark pine forests whose smell pervaded the car through the open window. Arriving late at night meant we were welcomed by the sweetest silence, moonlight shimmering on the surface of the swimming pool and we sought out our rooms to rest our weary heads. 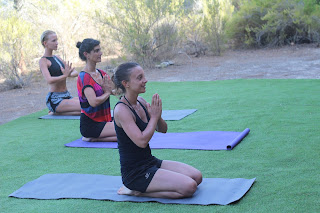 Days began early, refreshingly so it turns out. The next morning Dominika and Miguel were on hand to welcome us with huge warm smiles.  An hour or so of gently guided yoga in a tree-lined clearing a few minutes' walk from the house got everything off to the best possible start. Breakfast by the pool - delicious millet porridge topped with assorted seeds, berries and preserves - adequately saw us through the morning.

Our hosts had carefully devised a timetable of sorts for the week to come, each day focusing on different aspects of wellbeing but they were keen to emphasise that all their guests were to feel no pressure, tojust make the most of their time on the retreat in the ways they felt best.

Over the course of three sessions throughout the week, Dominika devoted an hour or so to each guest, offering the opportunity to broach anything that each person felt comfortable with, never pushing but astutely guiding.  She was most interested in initial reasons for coming to their retreat in the first place and in helping you find ways to seek out positive solutions to help try and overcome any obstructions that we may be facing in our lives. She suggested for example that time spent putting pen (or paintbrush) to paper might help to externalise hidden thoughts and feelings. I found it incredibly useful and was impressed by her degree of observation and ultimately how much she seemed to care.

Lunchtimes were spent around a beautiful huge dining table on a terrace overlooking the pine-filled valley. Bowls and dishes of the most delicious food I've had for a very long time were set before us and we tucked in.  What was amazing was that it was all macrobiotic, a dietary discipline I was fairly unfamiliar with. Vague memories of friends of my parents serving it to me and my family in the distant 1970s lingered as I was pleasantly surprised that it could be so varied, rich with differing strata of flavours and incredibly healthy to boot, a real revelation.

After siesta Miguel put his considerable expertise to practice in a special massage session that took place in a secluded spot in the nearby woods, private enough for me to relax and let him work his magic to the sounds of birdsong and ever-present chorus of cicadas. 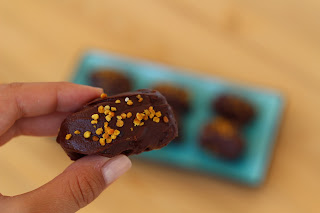 Another yoga session then on to dinner. One evening we celebrated a guest's birthday with a dessert of dates filled with cashew cream and coated in raw chocolate and bee pollen, the sort of food you might read about in Herodotus or the Arabian Nights.

My fellow guests were happier to relax by the pool or explore the rest of the island rather than go hiking or kayaking so those were saved for another set of guests.  I had accompanied Miguel one afternoon earlier in the season on a kayak trip around the legendary mini island of Es Vedra and have never experienced anything like it. Just us, the sea and sky and pleasantly sore arms for a day or two.

In more ways than one, it makes no difference when you arrive at Can Pino. You may have flown in from Munich or Milan in the dead of night, at a point in your life when you desperately need respite from a career that you love or a chance to contemplate ways to veer off afresh. Young in years or just at heart, in the end what you're looking for are the time and space to think, and a little loving guidance.
Posted by Unknown at 12:27 PM